Access to the West Beach is via a concrete road that passes Silloth Golf Club and leads over yellow speed bumps to a large free parking area beside the outer dock.

West Silloth Beach has a delightful expanse of clean sand, backed by dunes.   There are fine views across the Solway Firth towards the hills of Southern Scotland.  The beach is teeming with interesting animal and plant life.

Along the seafront runs a wide promenade, with steps straight down to the shingle beach.  Porpoises are sometimes spotted not far from the promenade which stretches out towards Skinburness.   In winter a wide variety of migrant birds visit the nearby salt-marshes. 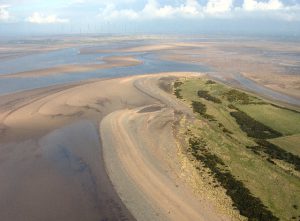 Grune Point is a sandy, raised shingle beach approximately one mile long, from Skinburness to its furthest extent. Its western side is exposed to the Solway and prevailing westerly winds.  To the eastern side, which is more sheltered, is Skinburness saltmarsh.

At Grune Point is the “Cumberland Machine-Gun and Anti-Tank Rifle Emplacement” – a design of pill-box unique to what was Cumberland.  The cairn on top was added later as a memorial to four Silloth Firemen who drowned while trying to rescue a wildfowler.

At low tide the remains of Hudson AM 771 can be seen in Moricambe Bay, near Grune Point which crashed on take-off from Silloth airfield during WW2. 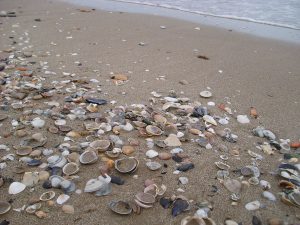 The shingle beach is a goldmine for beachcombers. Each tide renews the supply of water sculpted wood, rock and glass. Wave eroded pebbles reflect the whole Lake District and south-west Scotland.  Certain rocks are very characteristic.  Look out for granite, a hard rock with speckled pink, white and black colouring. Sandstone is also common and is a softer reddish brown colour.  Coal is sometimes washed ashore and in the past was collected to fuel homes.  Tiny pieces of smoothed glass add a further sparkle of colour to the shingle and weird driftwood is often carried great distances on the waves.  With appropriate care beachcombing can provide an extra dimension to a day by the beach.

There’s plenty of wildlife for the visitor to see.  The oystercatcher with its distinctive orange bill and pinkish legs, is a common sight. Groups of small mottled sanderlings, with their white wing bars, can often be seen close to the water’s edge. Curlews, with their long curved beaks and plaintive calls and crested, black and white lapwings, with their characteristic ‘pee-wit’ call and swooping flight, are a frequent sight in the sky above beaches and coastal marshes.  The dunes systems are home to several kinds of orchid and helleborine, as well as natterjack toads.

Building sandcastles, walking your dog, paddling in the sea; experiences enjoyed more when there’s no litter on the beach.  The majority of litter on our beaches is left by those visiting it.  We need to do everything we can so that the beaches can be enjoyed for generations to come, this includes removing our litter each and every time we visit the beach.